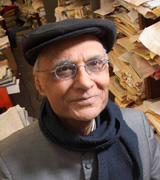 The idea of producing a Universal Declaration of Human Rights by the World’s Religions has been proposed by Arvind Sharma, the convenor of the 3rd Global Conference on World’s Religions after September 11. Professor Sharma has been teaching at the Faculty of Religious Studies at McGill University since 1987 where he is the Birks Professor of Comparative Religion. He is the convenor of a series of global conferences under the title, “The World’s Religions after September 11”, which represent previous stages in the development of the proposed declaration. This project has the support offive Nobel Peace laureates: The Dalai Lama, Archbishop Desmond Tutu, Madam Shirin Ebadi, Bishop Belo of Timor-Leste, and Professor Elie Wiesel.