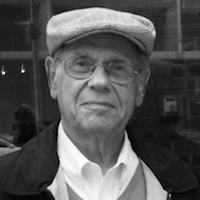 Gregory Baum was born in Berlin, Germany, in 1923, to a Protestant father and a Jewish mother and was sent to England as a teenager for safety. At the outset of WWII, he became a refugee and was interned in Canada, in 1940. He received a BA in mathematics and physics (1946) from McMaster University, before going on to complete an MA in mathematics at Ohio State University (1947). A conversion to Roman Catholicism in the interim was instrumental in shifting his academic interests towards the study of theology. He went on to complete a DTh at the University of Fribourg (1956).

Baum served as a peritus, or theological advisor, during the Second Vatican Council (1962-5) to the Ecumenical Secretariat, which produced three conciliar documents, ‘On Religious Liberty’, ‘On Ecumenism’, and ‘On the Church’s Relation to Non-Christian Religions’. His participation in the formal proceedings of Vatican II garnered international recognition. It also signalled the subsequent course of an academic career devoted to questions about the relation between religion and society and inter-faith dialogue.
Baum has since served as Professor of Sociology and Theology at St. Michael’s College in the University of Toronto and Professor of Theological Ethics at the Faculty of Religious Studies at McGill University. His publications include That They May be One (1958), Religion and Alienation (1975), Theology and Society(1986), Signs of the Times: Religious Pluralism and Economic Injustice (2008), and The Theology of Tariq Ramadan: A Catholic Perspective (2009). He also founded the journal The Ecumenist in 1962, which he edited until 2004.

Baum was invited to deliver the CBC Massey Lectures in 1987, subsequently published as Compassion and Solidarity: the Church and Others (1988). Two years later, he was invested as an Officer in the Order of Canada in recognition of his ability to inspire persons from a wide range of faith backgrounds. He holds honorary degrees from many universities, including: Wilfred Laurier University (Kitchener, ON), McMaster University (Hamilton, ON), and Concordia University (Montreal, QC).